By now, no one should be surprised that Kanye West is a fan of President Donald Trump. It’s been months since he first posted a selfie wearing a “Make America Great Again” cap, so the surprise should be gone.

And yet, there we were again Monday morning, talking about West and his red baseball cap after his appearance on Saturday Night Live and his most recent remarks about repealing the 13th Amendment.

But for many African Americans, the deeper question for West – or for anyone with melanin in their skin – is why.

Why do you support Trump, given his offensive remarks, his silence on white nationalism, his rollbacks of Obama-era policies? What makes an African American put on a MAGA hat?

What in the world are these black folk thinking?

When I found out Trump would be at the Landers Center campaigning for Mississippi Senate hopeful Cindy Hyde-Smith, I decided to go find some African American Trump supporters and ask.

And that’s how, in an election season punctuated by a bitter Senate battle for the Supreme Court, I found myself strolling into a “Make America Great Again” rally on Tuesday afternoon.

Here’s what I learned.

No surprise, traffic was a mess on Church Road, with traffic backed up as early as 3 p.m. if not earlier. It was while I was stuck in traffic that I first saw some black folk sporting Trump gear.

They were selling it also.

I saw at least three tents at that intersection, all staffed by African Americans displaying popular Trump-themed shirts. “Drain The Swamp!” and “Lock Her Up!” shirts were among the sure sellers.

I was focused on parking and getting checked in, so I didn’t stop to talk to them. Plus, they looked busy. I’ll never know where they stand on Trump or his polices, but I couldn’t help believing that these vendors would be selling shirts regardless of the event.

Whether it’s Trump 2020 or MLK50, the process is the same: put the design on the shirt, make the shirt, sell the shirt. Repeat. It’s just business.

At the end of this sweaty October day, it was obvious that Trump represented a business opportunity for these entrepreneurs – and the hustle don’t stop for nobody. On this day at least, Donald Trump is simply good for business.

Here’s what you should understand about Donald Trump and his popularity in Red State America: Remember how America (or the world, for that matter) was captivated by Trump’s predecessor, President Barack Obama? Remember Rev. Jesse Jackson crying when Obama was elected and how you felt Obama was going to get America back on the right track after eight years of George W. Bush?

Well, that’s how Trump supporters feel about him. And it was palpable from the moment I walked into the Landers Center.

I didn’t feel threatened though – not as an African American or as a member of the “fake news media.”

But it was hard to conduct interviews, what with the 80’s-heavy playlist that was blasting through the arena.. The playlist included plenty of Lionel Richie, a couple of songs by Michael Jackson, and Rihanna’s “Please Don’t Stop the Music.” They even played the long album-version of Prince’s Purple Rain – minus the violins. It wasn’t as heavy on country music as one would expect.

If you’re carrying around an image of angry Trump voters, well there was no anger in the building. They were too happy to welcome their conquering hero.

“A vote for Republicans is a vote for lower taxes, less regulation and more products made right here in the USA. It’s a vote to reduce crime. Respect law enforcement and restore the rule of law. It’s a vote for strong border safe communities and thriving families which you are.”

By 3:30 or so, after I’d gotten checked in and cleared by the Secret Service, I made my way to the media area. It wasn’t until then that I learned that news media were confined to a very small area on the floor of the Landers Center.  Despite me spotting a few specks of color in the then-sparse crowd, I was prohibited from leaving the media zone to go get interviews. That meant I had to wave people down and ask them to come chat with me.

One of those people was Colin Richmond, a Memphis native and staunch Republican since 2000. 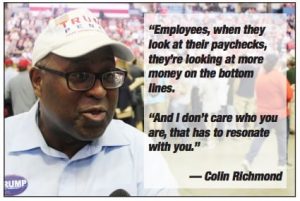 “I’m here to let the president know that we love him. We support him. We’re praying for him,” said Richmond, 49. “And that he is delivering on the promises he made during the campaign. And we just want to let them know we’re here for him.”

“I think a rising tide lifts all boats,” Richmond said. “And the President is for-all Americans –for African Americans, Hispanic Americans, Latino Americans, he’s for all Americans.

“I’m a business developer and employees, when they look at their paychecks, they’re looking at more money on the bottom lines,” he continued, referring to Trump’s tax cuts. “And I don’t care who you are, that has to that has to resonate with you.”

Richmond’s positions have put him at odds with his parent’s generation. “I have a have an uncle who’s a radical Civil Rights activist. I love him dearly. He’s my mother’s brother. But he is sincerely wrong,” he said, without going into detail.

“I never considered myself a minority but yeah, I was born to a single mother,” he added. “But at the same time, I learned that if I buy a widget for 50 cents and sell it for a dollar, I make a profit. It’s okay to make a profit. And I think a common misperception is that ‘profit’ is a dirty word.

“President Trump is for unleashing the economic capabilities of this country.”

For Michael Stewart, the choice to register as a Republican was pretty simple – and pretty straightforward. 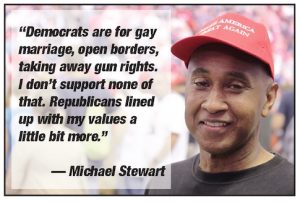 “Democrats weren’t representing my values the way I wanted them to,” said Michael Stewart of Memphis. “They’re for gay marriage, open border immigration, taking away gun rights . . . and I don’t support none of that. So Republicans lined up with my values a little bit more.”

A few minutes later, I spoke with Rev. Manuel Donis, a pastor who lives in Olive Branch. He joined the GOP in 2016 to support Ben Carson, but when Carson’s bid ended, he switched.  As a preacher in the Bible Belt, Donis checks off the same boxes many other evangelical voters do.

“I believe in supporting Israel,” Donis said, wearing a MAGA hat and Trump T-shirt. “I also believe in Biblical marriage. And I’m pro-life.”

So what is it about Trump that he thinks most black folk are missing?

“They need to come, pay attention and have an open mind,” Donis said. “We’ve been close-minded. We believe one way and we just stay that way. I began to do research and broaden my mind to see the things that have been holding the black community back for years.

“It’s time for a change,” Donis said. “We’ve been in this place for so long, it’s time to move on and do something different.”

“That’s one of the things I’m concerned about is trying to help these men when they get back into society, is that they have a fair chance,” said Donis, a prison chaplain. “So I believe President Trump and his cabinet are going to make things happen to help men and women who are re-entering society to get a fair shake.”

“A vote for … Mike Espy is a vote for Chuck Schumer. Nancy Pelosi. And the legendary low IQ person Maxine Waters.”

Nobody I spoke with denied that Trump says (and tweets) some outlandish things. But it wasn’t enough to drive them away.

“What drew me to Trump was his logical standpoint on politics and not getting caught up in being politically correct. He says it like it is, being blunt,” said Kidron Taylor, a 21-year-old from Batesville, Miss. “Yes, he says some rude, mean stuff sometimes, but when it comes down to the politics and his actions, it aligns more with what I believe in.”

Taylor, who revealed he is biracial, is a strong supporter of Second Amendment rights and Trump’s immigration policy.

“At the end of the day, I prefer someone who says stuff I don’t like sometimes and just say what’s on their mind than say, someone like Hillary (Clinton), who’ll say anything to make you feel good,” he said. “That’s someone I can trust more.”

“Blacks are more emotionally driven than by logic,” Stewart said. “Democrats pull on your emotional strings. I’m more driven by common sense. If it makes sense to me, then my logic is always going to overrule my emotions.”

Which isn’t to say that there’s blind allegiance.

“I don’t agree with everything he says,” Donis stressed. “But I like what he stands for. I’m a pastor, so those Biblical issues are very important to me. I can’t stand up in front of my congregation and say, ‘We need to be this way’ and then do something else. I’m not being truthful.”

Where the ladies at?

If you’re wondering whether there were any African American women there, the answer is yes. But remember, I was confined and couldn’t just walk up to the handful of sisters I saw in the crowd.

I did flag down two University of Memphis students – one African American, one white – and neither were Trump supporters. At just 19, both said it was their first time coming “to anything political” and for them, it was more of an academic exercise.

“I’m trying to be moderate and understand the way the right thinks and the way they interpret the things he’s going to say tonight,” said Tia Marshall, an African American sociology major.

“I just wanted to see how different people interact with different beliefs and see where I stand on the political spectrum,” added Tristan Scarborough, an anthropology major. “

And like the college students they are, they took notes. One of Marshall’s notes said “Holy Trump Water.”

“There was one man outside who was selling ‘Holy Trump Water,’” she said. “He was saying that Trump had ‘blessed’ the water. I thought that was very interesting.”

Both Marshall and Scarborough were too young to vote in 2016, but they’re all in for the 2018 midterms.

“This is the future of our country,” Scarborough said. “This is us. We need to not rely on our parents’ views and start making our own.”

“This is so important for our age group,” added Marshall. “This is going to be our country pretty soon and we need to make sure we have a voice in how our country is run.”

Posted in Around The Nation, Headlines, Politics & Law